Today was a day of unusual happenings.

At 6:30 am I get an early start in the dark. I want to get some real miles in today.  What do I do?  I get lost big time. I ride for almost an hour, more than 5 miles, before I realize the error in my ways.

As some of you may know one of my few ingrained talents is an excellent sense of direction. So, it is very unusual for me to get lost, and doubly unusual to not realize it sooner.  I literally went the wrong way out of Burgos, and had to retrace my path just to get back to where I started.

On a day when you will need every bit of energy to put in some long distances, I just wasted an hour’s worth of effort. In addition, it shakes you psychologically.

The next amazing part of the day was the following five hours.  For some reason I was able to cover 50 miles in 5 hours, for an average of 10mph/hr.  This is the first time during the seven days that I have been cycling the Camino that I have been able to record that kind of average speed including stops.

A lot of factors contributed.  Decent weather.  100% on the road, and not the path.  Relatively flat terrain. And a fierce determination given getting lost, and not being too happy about that.

It’s 12:30 in the afternoon and I am feeling pretty proud of myself. I treated myself to not one, but two full plates of pasta. Took my cycling shoes off, put my feet up on an adjoining chair and relaxed over lunch.

Little did I know what the afternoon had in store for me.

After a one hour lunch break the big decision was whether to get back on the bike.  Whether to try to get some more miles in.  I was not feeling great, but I was not feeling bad either.  So, I said to myself that I will start out, taking the path only, and going very slowly.  If at anytime I want to stop, I can find the next small town and get a bed at one of the Albergues (more on sleeping arrangements in a future blog).

I am riding along at a slow pace on the path for walkers, when surprisingly I see a small blue car coming toward me on the path.  The driver, a older local resident with a face that reflected years of farming, stops his car and puts his arm out the window gestering for me to stop.

He gets out of the car, puts his hands and arms in the air, speaking in rapid Spanish.  He speaks no English, and I am having a tough time following his Spanish.  But, his point I did get — namely, he did not want me to any further along the path/dirt road.  I get my El Camino guide book out, and turn to the map that I am following.  Or so I thought.

For the second time today, I got lost.  I failed to see a turn in the path and was proceeding as if all was fine.  It is not unusual, even at this busy time of year, to go long stretches without seeing another Peregrino.  Can you believe how fortunate for me that the man stopped me.  Almost like a messenger was sent down to stop me, inform me and allow me to get back on track. If he had not stopped me I would have ridden for miles and miles.  I thought I was absolutely on the right track and I knew that it was a very long one. As it was, the wrong turn cost me 5 miles and about 45 minutes of lost time.

Getting lost twice in one day!  Not normal. But this time, in contrast to the morning fiasco, I was less hard on myself, and more in amazement about how “lucky” I was to have this “messenger” stop me.

But this was nothing compared to what happened next.

I resume my cycling on the correct path at a slow pace.  The day’s efforts are beginning to catch up with me.  Every turn of the pedals seems like an effort.  The sun is beginning to show itself.  I am on an unusual stretch of the path that has a long distance between small towns or pueblos.

My chain breaks.  MY CHAIN BREAKS!  In all my years of cycling I have never had my chain just break in two. Without a chain you are dead in the water. The bike will not move unless you push it.  Holy cow!  What am I going to do now?

To remind you, I am in the middle the Spanish meseta, the high plains, where there is nothing other than fields of hay, oats and wheat. The occasional village has a population of 60 or so.  The nearest city is 75 miles away. And I am on the longest stretch of El Camino between two small hamlets. In addition it is now late in the afternoon and most Peregrinos have already reached their destination, so the number of fellow hikers on the trail drops off significantly.

Add to that the fact that bike mechanics is not one of my strong suits, to put it mildly.  I can change a bike tire but it is a struggle. Fixing a bike chain is not even on my radar scope.

Add to that, I chose to take this trip solo.  I did not join a group which would have support for situations like this.  I had no one to call, assuming that I could get cell service in the middle of nowhere.

I am miles from the nearest village.

My mind is racing, thinking of possible actions I could take. It has been less than 5 minutes since the chain broke. I know I am in deep trouble.

When, in the distance, I see four cyclists coming toward me on the path. I put out my hand, asking them to stop.  Two of the cyclists are kids, along with their father and a friend of his.  The family is from the Basque Country in Spain and the friend is from Barcelona.

The father does not even hesitate. He lays down his bike, takes off his backpack, unzips it, and pulls out a bicycle repair kit. Not the kind I have with me, but a serious one. He then takes out his blue colored surgical plastic gloves.  I kid you not!

He was like a surgeon going to work. Plastic gloves, proper equipment, aides on stand by to provide assistance when needed.  In 20 minutes he had fixed the chain. It was a miracle.

I was on the path for 4 hours this afternoon but I only went 16 miles, compared to 50 miles in 5 hours in the morning.  But this afternoon obviously was not about making miles.  This afternoon was about being the unbelievably grateful recipient of two strangers offering to help.

I ask myself, is this “go figure”?  Or is this more than good luck?  It’s as if someone today was keeping a close eye out for me, and when I needed help it was provided through unknown individuals. 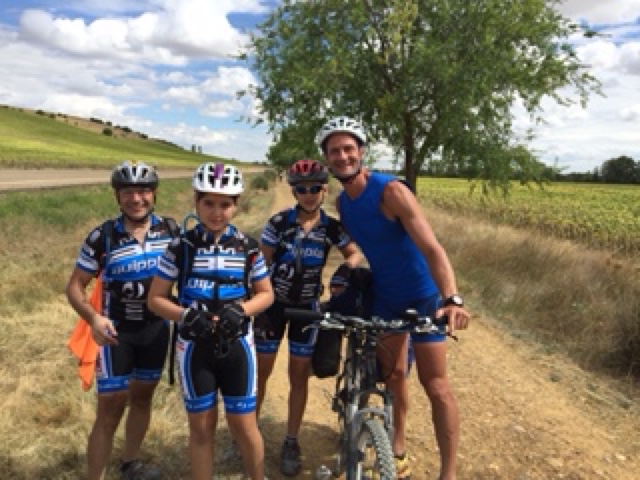 3 thoughts on “Go figure (or is someone up there looking after me)?”