I have reached him Pamplona, the Capital of the province of Navarra, the heart of Basque country.

Pamplona is also known for its once a year Fiesta de San Fermin and it’s famous Running of the Bulls.

And it is also known as a favorite hangout of Ernest Hemingway.  It was Hemingway’s “The Sun Also Rises” that put Pamplona on the map.

His favorite haunts still draw his fans — like me. This is a life-size bronze statue that stands at one of his favorite bars — the Cafe Iruna on Plaza de Castillo, the city’s main square.

The statue stands in a little bar off the main dining room at the Cafe Iruna.  During today’s daily 2-4 pm siesta the bar was closed. I asked the waiter if I could go in the bar. He said yes.

So, for ten minutes I stood at the bar next to Ernest. Just him and me. I just took him in. His hair, his facial hair, his full and animated face, his casual clothes, his solid stature.  I don’t know what it is that attracts me to him.  Maybe it’s his zest for life.  Living life to the fullest. Or maybe it’s his ability to capture it in writing. Something fascinates me about him.

On today’s ride I passed a small creek that used to be one of Hemingway’s favorite trout streams. 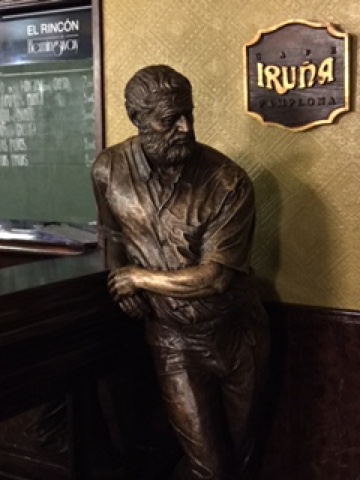