today Henry, my grandson, and i took a swim lesson together.  we did so at the 92nd Street Y on Lexington Avenue in Manhattan. 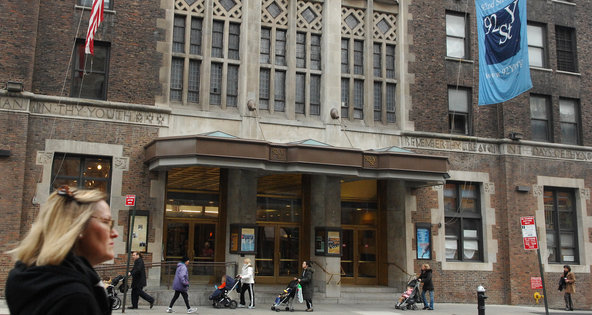 for those of you who are not familiar with the 92nd street Y you should be.  it is overflowing with phenomenal guest speakers, amazing musical and dance performances, talks by interesting people on even more interesting topics.  in addition it serves as a senior center and work out facility.

to give you some idea of the quality of the events that take place there on a regular almost daily basis, on Sunday my daughter and two of her friends all of whom are Downton Abbey fanatics went over in the afternoon to see the cast of Downton Abbey be interviewed about their new movie which is to be released on this Thursday.   a few months ago when Andrew Roberts, the author of the most recent Churchill biography was to be interviewed at the Y, whom did they get to interview him?   none other than David Petraeus.

my daughter Kelsey has signed my grandson Henry up for swim lessons at the 92nd Street Y.  she asked me if i wanted to be the adult in the pool with my 9 month year old grandson. of course my answer was yes indeed.  my gear was a swim suit and all people in the pool were required to wear a swim cap.

with grandfather holding onto Henry with both hands we slowly stepped into the pool, trying to get used to the coolness of the water.  i was hoping that everything would go ok for Henry in the lesson.  we had two other participants in the class for kids who are less than a year old.

but for some reason Henry was not happy.  he kept looking at his mother standing nearby the pool.  he kept telling me he was not completely happy by wimpering, semi crying, and raising his voice.  while Henry cannot talk yet, he sure knows how to let you know if he is not happy.

me being the eternal optimist i continued to work with him in the pool figuring that at any moment Henry will turn the corner and be ecstatic about the experience in the water.  that did not happen.  for the entire lesson Henry was not happy.

so disappointed was i.  i tried following assiduously the instructions of the swim coach, who was terrific.   i had Henry laying with his tummy down in the water, but with his face just slightly above the water line. in this position we practiced kicking and we practiced stroking with our arms.  i tried dipping his head in the water, following the instructor’s directions.  i tried laying him on his back and having him kick his legs.  i tried jumping up and down in the water holding Henry tightly.  i tried giving Henry toys to play with in the water.  i tried bringing Henry over to the wall of the pool, holding on to the side wall and trying to kick.  and i tried singing songs to Henry along with the other two parents in the pool with their children.  i tried holding Henry in my left arm.  then my right arm.  then with his back against my chest, followed by holding him with his back against my chest.  i tried holding him tightly, and then holding him loosely.   i tried talking to Henry constantly.  i tried being quiet around him.   you get the picture.  i believe i tried everything.

but nothing worked.  Henry was clearly unhappy.

well, trying to put a good spin on this will take some doing.

let’s just say i learned a lot about separation anxiety today.  and i got to spend more than 30 minutes in the pool with my grandson.